What a great weekend we had. Fun food and fellowship!!

We started out on July 1st in downtown Ogden. Everyday at lunch time, right outside the city government building, are two food carts peddling Mexican cuisine. We decided to have this for lunch. This turned out to be an awesome choice! Tacos and Tamales to die for, traditional Mexican style sauces, and very low-cost! As we sat there on some benches eating I noticed a memorial to Firefighters. Not much history behind it, but cool none the less.

We also discovered that Augusta, the birth place of James Brown,  is not the only place with a James Brown memorial.

Okay, so maybe this is not the ‘Godfather of Soul’ James Brown, but it is “a” James Brown.

After our lunch we went to the Farr Ice Cream Parlor. Farr Ice Cream has been made here in Ogden for many years. The parlor has a 50’s feel with memorabilia and Farr Ice Cream ads from the 50s and 60s. The ice cream is absolutely awesome. Probably some of the best ice cream I have eaten in quite some time.

Friday afternoon took us out to Smith and Edwards. Painted on the wall is “We Have What You Are looking For, If we Can Find It.” This building is several acres of open space with a complete Ace Hardware, largest stock of Army surplus I have seen anywhere, full gun shop, full western tact shop with about 50 saddles to choose from and custom leather work to your specs, bulk candy, several aisles of canning and food preservation stuff, kitchen gadgets galore, large selection of outdoor gear – hunting, fishing and camping, and just several aisles of miscellaneous stuff. It is an experience. I see a couple of trips back before we leave.

Saturday we went to the market on Historic 25th Street in downtown Ogden. Pretty cool selection of stuff. I bought a bottle of a locally produced cooking sauce, Grandma Sandino’s Sicilian Sauce – You’ll Love It Or Else. This stuff is awesome. It is an olive oil and garlic blend sauce. It takes just a little to liven up any meat or seafood and. use it as dipping sauce for bread. Check them out at http://www.GrandmaSandinos.com, you will not be disappointed.

As the community prepares for Pioneer Day, Ogden has placed out horse statues painted with various themes, Here are some of our favorites.

Sunday was an awesome day! We attend the blessing of our granddaughter Macee. It was truly a spiritually uplifting time. My son did an outstanding job blessing his daughter. She was absolutely beautiful in her dress.

Here she is with her parents and both sets of grandparents

After church we enjoyed some awesome pork and both hot and BBQ wings cooked on Kenny’s Traeger Grill. We enjoy eating at the Carrigan’s! Kenny can work the Traeger like a pro. And the fellowship is awesome too!!

Monday morning found us enjoying the Cherry Days Parade in North Ogden. The Carrigan’s and my son and his family came up to join us. This was a truly great parade. The parade started with a flyover by a pair of F35 Lightning IIs from Hill Air Force Base. The parade had your typical patriotic themed floats and walking groups. What really impressed me was right behind the colors were three floats from different veterans groups. As the passed by the applause and cheering was overwhelming. This community has a true love for their patriots. There was definitely a lot of cowboy themed stuff as well including several horse and riders and rodeo queens. Some firsts for me was an Angel Moroni float. Angel Moroni sits atop Mormon Temples. Seeing one in parade as a float was interesting, but then again I am in Mormon Country. Also, the entire Utah Logan Mission was in the parade. The young missionaries walked and the Mission Presidency with the Senior Companion Missionaries rode on a float. Never saw church missionaries in a parade as a whole mission before, pretty cool.

Even our Morgana enjoyed the parade in her patriotic best!! She especially liked the floats that were passing out popsicles on this rather warm day. 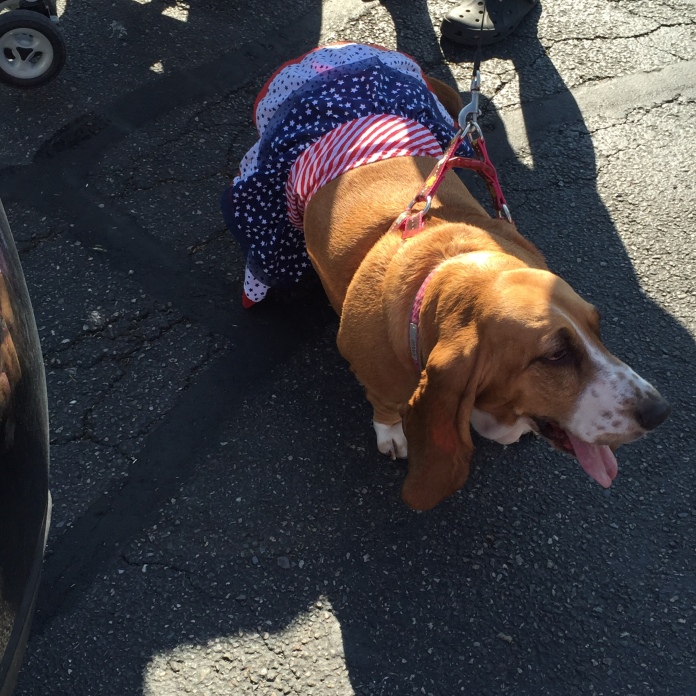 After the parade found us back here at the RV Park. I had reserved the club house. Kenny Carrigan (my son’s father-in-law) cooked up his ‘World-Famous” Kenny Burgers (okay, they may not be world-famous, but they should be). These one pound behemoth burgers are a mix of ground beef and other Kenny approved ingredients. We had the other usual picnic fixin’s and everyone enjoyed swimming in the pool. It was nice to host them for a meal as the Carrigan’s have fed us on several occasions.

Other happenings for the Leiter/Holt clan, Morgana has found a new love of riding in the truck. When we get to a stop sign or a red light she rolls down the back window and barks at the folks in other cars. It is quite comical. And going through the drive through at McDonald’s, she will bark and bark. Mostly because she knows here and Duke are about to share a soft serve ice cream and partly because she just love McDonald’s employees!!! 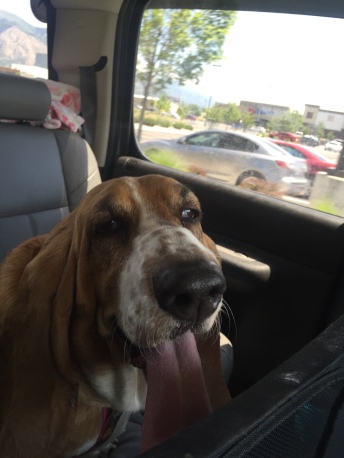 Duke has recovered nicely from his tooth extraction and dental work. He is back to being a puppy….at 12!!!! Who knows how long that tooth had been bothering him. Chris is doing well at his job. It looks like he has found a place to rent and will be staying here when we leave on the 29th. This will keep him close to BYU-I when he gets ready to start school. Dianne and myself have been doing well. I am fighting allergies. This bowl holds in all the smog and dust of the entire valley combined with very little rain in about 2 months is a sinus wrecker.

On a sad note, a friend and fellow Jeeper lost her battle with cancer this past week. Pam Cannon and her husband Steve are true Jeepers. They loved everyone and would help ya in a heartbeat. I know Steve will continue on as all Jeepers do. We have been keeping him and his family in our prayers. If you feel so inclined, please do the same.

Well that about wraps up it up for this update. Stay frosty my friends!