We got back to Las Cruces in time to make our appointment at the Amador Motel. A ghost tour of a historic hotel with a very rich history. From the El Paso Ghost Tours Website: 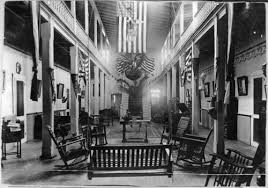 The Amador Hotel has seen the days of the wild west and the expansion of the railroad networks leading west. It stood as a home and business location for the Amador family before being closed and shut down for years.  During the 20th century, the Amador was one of THE places to be, and was considered a social hub within the area.  Without a doubt, the hotel has its share of guests; join us as we attempt to communicate and make contact with the spirit of the guests that never left the building.

The Amador is currently undergoing renovation in an attempt to bring it back to its beautiful, former glory.

In 1850, Gregoria Rodela de Amador, a widow from Juarez, moved to the newly formed town of Las Cruces, where she may have opened a store.. Her son, Martin, expanded the business and began hauling freight between Santa Fe and Chihuahua. In 1866, Martin Amador built the original structure of the Amador Hotel as a one-story house for his family on the corner of Water and Amador streets. For the next twelve years, the Amador family lived in the building and furnished rooms to their freight team drivers. Then in 1878, a new home was built across the street for the ever expanding Amador family. At that time the original Amador home was turned into a rooming house and hotel. In 1885, a second floor, balcony, and lobby were added to enhance the hotel operation. Through the years, further additions and modifications were made to add space for a livery, open patio, and bar.

During most of the 20th Century this grand old building served the community as a social gathering place with fine dining, libations, and entertainment. All the while, it maintained a reputation as one of the best places to stay in the region. Numerous celebrities, politicians, military officers, and other notable and notorious figures frequented the Amador Hotel. The Amador family sold the hotel to Citizen’s Bank in 1970.

Currently, the City of Las Cruces owns the historic building. A group of Las Cruces citizens formed the Amador Museum Foundation, which is raising money to preserve the hotel and develop it as a Las Cruces history museum.

This history has it’s share of charm, but as we found out on the ghost tour this building has seen it’s share of outlaws, gangsters, ladies of the evening, and travelers. Even Pat Garrett graced the building and its bar.

With that said, death is inevitable. The Amador family lost children in the building. And then there is Ovida “Cricket” Coogler. She was young and knew how to play the game. She knew many politicos intimately. Many may have shared things with her intentionally or unintentionally. But she died a mysterious death at a young age. More information can be found here  http://www.lcsun-news.com/las_cruces-opinion/ci_14661077 about her story and disappearance. She is said to be on e of the ghosts that has taken refuge at the Amador Motel. She used to frequent and work their, so why not go back there. There was also a waitress there from the early days Hortensia. She was also known to be a ladies man and liked her men young.

So I share this with you to tell you that I sort of believed in ghosts. After this tour I am more inclined to believe. The gadgets they used, to include mini mag lights, indicated communication. Hortensia took a liking to Brad. She actually followed him around the tour. We also had communication with a couple of children as well. Whether we actually were communicating with the dead or just getting a really cool light show to our questions, it was a great evening!!!!

After the tour one of the guides took us to the Masonic Cemetery and to Pat Garrett’s Family Grave Site.

Pictures from the Amador

Lights indicating the presence of spirits.