Happy Sunday Afternoon to all of my family and friends!!! As promised earlier this week I am posting all the news worthy stuff of the last couple of weeks, Starting with October 13…..

October 13 was Brad’s 17th Birthday!!! I cannot believe my little buddy, the Bradster, Bradman, my little Rutabaga Head is 17!!! We started the day out with lunch, Cajun Style, at Bourbon Street Seafood Kitchen. He got a little surprise for desert! 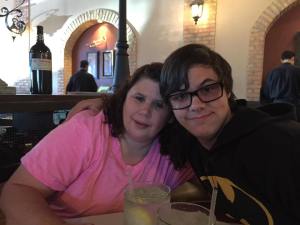 After lunch, we did some Birthday shopping with the Birthday Boy. We topped the evening off at Freddy’s for some frozen custard!!

On October 18 we went to Austin, Texas for a thirty-one Bags meeting. It was at a Texas BBQ place. We got our first taste of Texas BBQ. BBQ in Texas is NOT pulled/chopped pork, but beef brisket. I have to say I was quite impressed with the flavor and tenderness of the brisket. I can see myself enjoying some more of that while we are here.

Dianne started work on October 20. She is working at Christus Santa Rosa Hospital. She spent most of the week in-processing and learning about her work area. While she is at work Brad and I have our student/teacher relationship. It has been fun, and at the same time challenging, being his Home School Teacher.

Bright and early on October 25 I attended the Concealed Handgun License Class and Qualification for my Texas non-resident CHL Permit. I had a really great time and truly enjoyed meeting some Awesome people.

October 25 and 26 was Stake Conference for the church here. We got to hear some spiritually uplifting talks and here some wonderful music. On Sunday afternoon Brad attend the Youth Fireside with one of the General Authorities with the church. He seemed to enjoy that a great deal.

Then Monday October 27 in the early afternoon I get a call from Dianne. She had been rushed from her work area to the ER. Apparently she about or did pass out. Her blood pressure in the ER was like 70s over 40s and she was septic. They filled her full of IV Fluids and antibiotics. It was determined that she had Colitis. She was released late Wednesday afternoon. Nothing like being away from family and friends and being in the hospital. She did well. The staff at Christus Santa Rosa is extremely caring. Her new supervisor checked on her three times while she was in the hospital. Not to mention the people she just meant on the unit sending her texts or coming by.

Thursday October 30 was our Wards Trunk-n-Treat/Chili Cook-Off. Dianne came along with me and Brad. Brad was working with other young men running a bean bag toss for the little ones. Dianne did not eat much and was pretty wiped out by the time it was over, but she enjoyed getting out and being seen. I got to eat some Texas Chili. I really enjoyed the flavor and think it only took three Engine Company’s from San Antonio Fire Department to put out the fire in my mouth!!! As I have done for the last 5 or so years I handed out candy and wished the children Merry Christmas. The look on their face is just priceless. This years funny Merry Christmas moment goes to a little girl, maybe 6, who responded to my Merry Christmas with “excuse me sir, it is Halloween!!” The fun I have…..

On Friday the 31st, Halloween, we went to dinner at IHOP. Dianne and I really thought Brad would want to decorate a Scary Face Pancake….he declined. If the waiter gave him a final chance to enjoy one…..Brad was a “little” embarrassed. We then went to Embassy Putt Putt where Dianne and Brad, tying for first, handed my a defeat and forcing me as the loser to buy Ice cream. But before we left, Brad’s future wife sang him a song and posed for a picture with him. Love was in the air…..so were icicles. 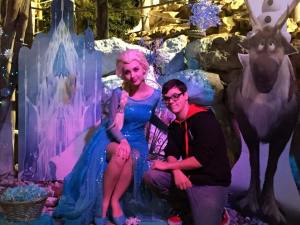 Yesterday we visited the Alamo, but you will have to wait until next time to hear about that. I will say this, it is a truly humbling experience……..